Few people outside scientific research have any knowledge of how it is actually funded. Consequently they have little appreciation of the considerable financial obstacles that must to be overcome for research to be undertaken.

The general public assume that most scientific research is funded by the government. This is certainly not the case for medical research, and charities and their supportive public play a truly massive and indeed crucial role in funding essential research into cancer causes and cures.

So how are grants actually awarded?

The general consensus is that the scientist comes up with a research idea, asks an organisation for some funding to pursue this and, if the project is subsequently judged to be a good idea, it receives funding. Unfortunately life is not that simple!

The problem is that for a grant application to be successful, the scientist must write a very detailed grant application describing the background to the project, why it is a good idea, what they want to do and, most significantly, what the expected outcome will be.

Many grant applications are turned down because the research projects are too speculative and may not produce a predicted outcome. If you think about it for a moment, this ‘play it safe’ attitude is not actually a good basis for denying funding, since the research should be about discovery not prediction.Investigations that initially seemed totally irrelevant to any practical objective have yielded most of the major discoveries of medicine. Basic research is the lifeline of practical advances in medicine. To quote the eminent biochemist and Nobel Laureate Arthur Kornberg,  “The future is invented not predicted“. He enlarges on this most succinctly in his article “Of Serendipity and Science”

Many of the great medical breakthroughs of the last century have come from basic scientific research which was not “goal orientated”. If you accept this, it surely makes little sense to base major funding decisions on what the researchers predict they will find. It is not logical.

In addition, there are also several unfortunate side-effects of the current “goal orientated” grant-funding philosophy:-

Firstly, only the least adventurous or “pedestrian” play-it-safe projects tend to be funded. The inevitable consequence of this is that research progress is usually quite slow. It takes faith on the part of both the scientist and the funding body for science to advance in what can be spectacular leaps rather than small incremental steps. Take a look at the article by Gina Kolata, (NYTimes, June 2009), and you will get the picture.

Secondly the “goal orientated” approach is bad value for money. It is a sad fact that researchers spend an unfeasibly large amount of time writing very detailed grant applications which mostly do not get funded. This wastes the time and resources of both the researcher and organisation considering the application. Indeed the true scale of the latter can be quite alarming.

John Hawks, Associate Professor of Anthropology at the University of Wisconsin, highlights the problem in his weblog

In it he states that, in America, the true cost of deciding who gets the money and administering how it is spent, amounts to nearly half of the federal grant budgets. Whilst I do not know how this translates to UK based funding bodies, I suspect that it is not much different.

There’s absolutely no question that this money could be better allocated!! How can it be good value for money when thousands of research scientists spend massive amounts of time writing grant applications which never get funded and many of the organizations which consider them also spend considerable amounts of time and money making these decisions!

Yet another problem with the current system is the slow response time between research grant application and funding approval. It can take anything from 8 months to over a year for a funding decision to be made. A direct consequence of this is that many good research ideas miss the boat just because the necessary funds were not provided in a timely fashion.

What is the alternative? Is there a solution to this problem?

It is quite clear that funding bodies cannot simply hand out cash to whoever asks for it. But there could be significant improvements made in the decision making process. For what it’s worth I would suggest that, instead of lengthy grant applications, which cost both time and money to write and assess, these should be replaced by short 1 or 2 page documents outlining what a researcher and his laboratory wants to do and why, plus a short CV. This would obviously reduce the administrative cost of processing applications, thereby releasing additional funds for more projects with a greater element of risk.

The added bonus would be quicker funding response times combined with researchers spending less time writing unsuccessful grant applications and more time doing the research. While some unworthy projects may slip through the net, this is surely a small price to pay when you take into account the overall benefits of such a system.

My research team and I are so grateful to smaller charities like Caring Cancer Trust, Humane Research Trust and Cancer Prevention Research Trust.  Their decision to fund our non-animal tested cancer research has been based on a general outline of the planned research work, references from others and our previous track record. I believe our research results have justified their faith in us and their funding decision making. We cite their support for our groundbreaking work, (see my recent BBC interview on Utube), in peer reviewed journals which are internationally recognised as being amongst the best and most authoritative in their field. 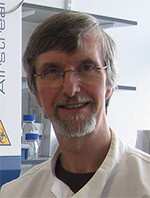 Dr Ian N. Hampson is Senior Lecturer in Gynaecological Oncology at the University of Manchester School of Cancer & Enabliing Sciences.