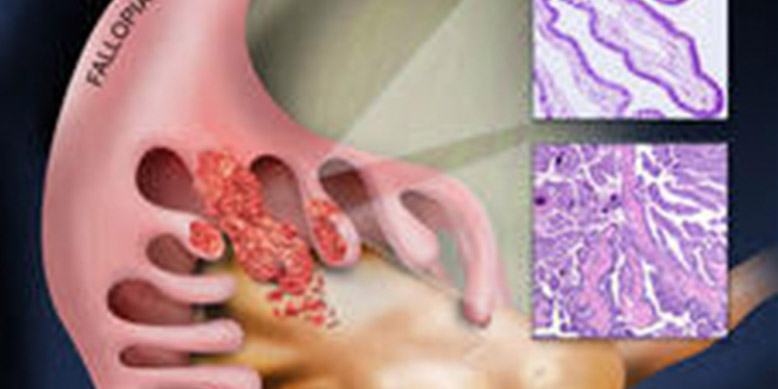 A microRNA—a molecule made by cells to turn genes on and off—called miR-181a may help high-grade serous ovarian cancer form, a study has found. The scientists think the microRNA could potentially help doctors detect ovarian cancer earlier when it is easier to treat and cure, the National Cancer Institute reports.

Although ovarian cancer is the fifth-leading cause of death from cancer in women, scientists are why it forms. Now a new study at the University of Michigan suggests that a microRNA—a molecule made by cells to turn genes on and off—may kick-start a type of ovarian cancer called high-grade serous ovarian cancer.

Current thinking is that ovarian cancer starts in fallopian tube cells that have a few gene mutations. Those abnormal cells eventually turn into a precursor of cancer. Years later, the precancer becomes full-blown ovarian cancer.

MicroRNAs turn genes down by grabbing onto messenger RNA—the middleman between genes and proteins—and stopping protein production. In so doing, microRNAs help fine-tune the activity of genes. In fact, a single microRNA can regulate a thousand different genes.

Several microRNAs have been linked to the development, growth, and spread of different types of cancer. For instance, in 2014, researchers at the University of Michigan found that women with ovarian cancer whose tumours had low levels of miR-181a lived more than 4 years longer without their cancer coming back than women whose tumours had high levels of the microRNA.

In the new study, the team saw a similar trend: Across 10,000 patients with 38 different types of cancer, those with tumours that had low levels of miR-181a lived several years longer. One protein in particular, called RB1, controls cell division and protects cells from genome instability Researchers found that excess miR-181a lowered levels of RB1 in the fallopian tube cells. As a result, the cells had unstable genomes, grew out of control, and formed tumours.

But another question remained: How do cells with excess miR-181a survive with such unstable genomes? Cells normally self-destruct if their DNA is damaged beyond repair.

The answer, the researchers learned, is miR-181a’s effect on another protein, known as STING. STING’s job is to push the self-destruct button if it finds broken DNA floating around. But because excess miR-181a lowered levels of STING in fallopian tube cells, the cells avoided that fate, allowing the damaged cells to stay alive.