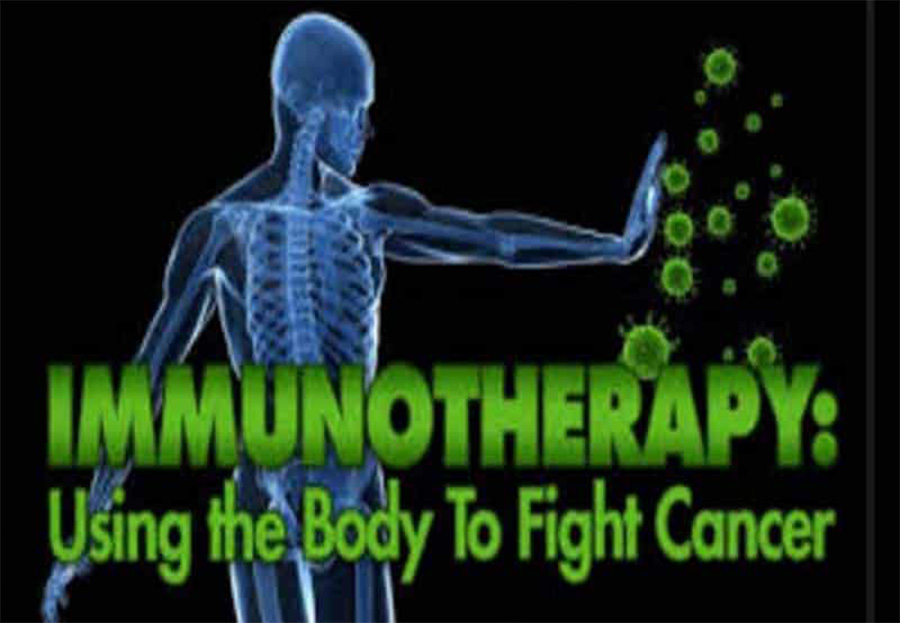 Immunotherapy is a type of cancer treatment which assists the body’s immune system to fight cancer.

The body’s immune system is a network of cells and organs that protects the body from threats such as virus infections, toxins, fungi, bacteria, parasites and abnormal growth of tumour cells. The immune system recognises and attacks foreign organisms entering the body to stop them from harming the body. It does this using both innate and adaptive responses. The former is more rapid and non-specific while the latter takes longer but mounts a defence which is tailored to the particular threat.

White blood cells, (T and B cells, Lymphocytes), are the immune system’s main effectors whereby B-cells produce antibodies which fight invading bacteria and viruses. There are two types of T-cells One controls the immune system while the other binds to and kills cells which are virus infected or are abnormal.

The immune system can detect and eliminate abnormal cell growth using killer (cytotoxic) T-cells, although cancer cells can disable this response to evade being killed. Furthermore, in some individuals, the body’s immune system may not be strong enough to eliminate growth of early stage pre-cancerous cells which can subsequently evolve into fully malignant tumours.

Immune therapy drugs can either stimulate the immune system to reactivate and eliminate this abnormal growth, (Immune stimulants), or remove the cancer cell’s ability to evade detection, (checkpoint inhibitors), so that the immune system can then attack it and destroy it.

A number of cancers including Head, Neck, Lung, Kidney, Liver, Bladder, Melanoma, Hodgkin lymphoma, Childhood Leukaemia and Breast Cancer can be treated with immunotherapy, alone or in conjunction with chemotherapy, depending on the patient’s general health, the treatment already given and the cancer stage. It is mostly used for cancers that are already advanced when diagnosed or where the cancer has come back and spread after earlier treatment.

Depending on the type of cancer and the patient’s response to previous surgery, chemotherapy or radiography, a number of different immunotherapy treatments can be applied.

MABs are a type of antibody made in the laboratory and injected into the patient’s body. They specifically attach themselves to the cancer cells, making it easier for the patient’s immune system cells to find and kill them. 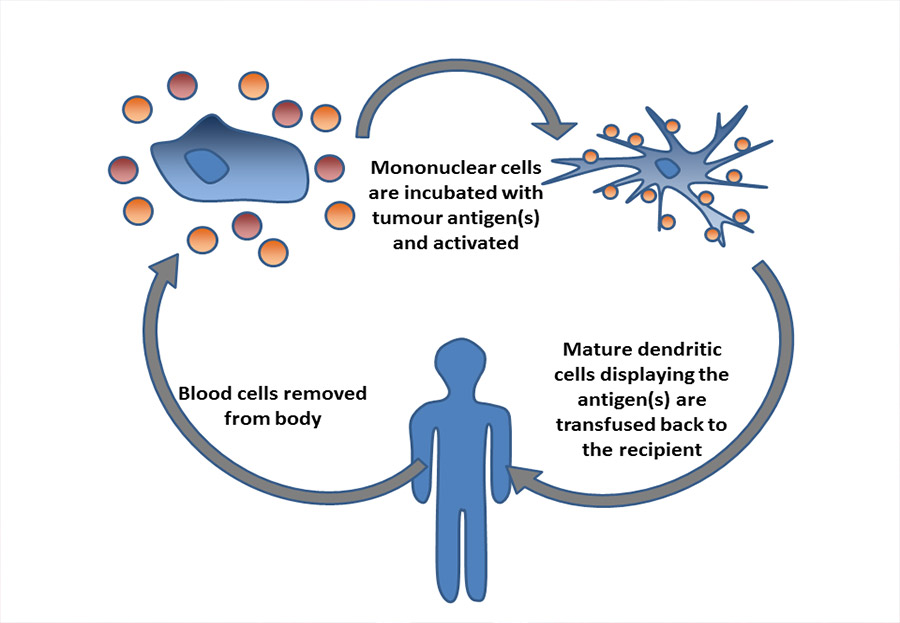 Clinicians remove some of the patient’s immune system cytotoxic T-cells to grow and genetically alter them in the laboratory to enhance their ability to bind to and kill cancer cells before re-injecting them back into the patient.

Therapeutic cancer vaccines are given to trigger the immune system to recognize and attack certain markers, or antigens, present on or in cancer cells. As they are not normally effective when used as single-modality therapy, they are used in combination.

The patient is deliberately infected with a virus that preferentially infects and kills cancer cells. As the virus destroys the infected cancer cells, they release new infectious virus particles to help destroy the remaining tumour.   These oncolytic viruses can also activate the immune system’s cytotoxic T-cells to target and eliminate cancer cells throughout the body. They can also be genetically modified to produce immune-stimulating chemicals, or to make them more specific for cells of a particular cancer. They are often used in combination with another immunotherapy. This all sounds great, but one problem is that the patient’s immune system can start to recognise the oncolytic virus as a foreign invader and begin to attack it.

Immunotherapies can be injected into a patient’s vein, taken orally as a capsule or, in certain cases, as a cream rubbed onto the skin. As with chemotherapy, however, immunotherapy treatment can cause unpleasant side effects, including skin reactions, fever, chills, fatigue, nausea, headache, sinus congestion, diarrhoea, allergic reaction and increased risk of infection.

Finally, immunotherapeutic treatments are generally very expensive and treatment frequency depends on a number of factors, such as the type and stage of the patient’s cancer, the type of immunotherapy being administered and the patient’s reaction to the therapy.

Although immunotherapy is a very promising treatment, it is not a universal cancer panacea. For example, as with many other cancer treatments, it is well known that immunotherapy treated tumours can relapse – and when they do, the disease has evolved to become resistant.

Immunotherapy is a hugely promising approach for treating cancer.

Cancer treatment may undergo a paradigm shift to immunotherapy soon.

Category: In the NewsBy Ian MacWattJuly 1, 2019Leave a comment